David had sinned.  Horribly.  It was the type of sin that has brought down giants.  And David had slain giants.  Bears.  Lions.  While he was a boy tending his father’s sheep.  He had even killed a man giant.  A man so large that the other soldiers were dwarfed by him.  Yet David stood up to him.   And David won.  David killed the giant with a stone and sling.  Shot him right square in the forehead and then cut off his giant head.  Oh.  David had won that battle.  He had saved his country.

Yet when it came time to slay the giant of lust, David lost.  He couldn’t conquer the desires of his mind and body.  He had allowed the sight of a beautiful married woman to undo him.  Oh.  He had every right to walk on the roof of his house in the middle of the day.  And she had every right to bathe in privacy on the roof of her house.  It just so happened, that both events took place at the same time.  And David couldn’t control his desire to have this woman.  To make her his own.  At any cost.  Possibly without her permission.  Oh.  He wasn’t thinking of the cost at that moment.  He was thinking of how great it would be to conquer yet another beautiful woman.  Never mind that he had many wives at his disposal.   Never mind that she was married to one of his top warriors.  One of the men who would fight faithfully to the end for this king.  For the king who took advantage of his wife while he was at war.

The woman later returned to David with news of her pregnancy.  You see.  Her husband was at war, so he wasn’t the father.  Everyone would know of the charge of unfaithfulness.  Even if they didn’t know who the father was.  How could David come forward and claim the child as his?  There was punishment for adultery.  Death.  So David did the unthinkable.  Again.   He stooped even lower to hide his adultery.  He made sure this woman’s husband, a mighty warrior, was killed in battle.  Put him on the front lines and then withdraw.  Make sure he is killed.  That was David’s command to General Joab.  And the General obeyed.  Did he really have a choice?  He made sure Uriah the Hittite was killed.   And he made sure that King David knew the man was dead.

After the pregnant widow’s mourning period was over, David did the honorable thing.  He took her into his home and made her his wife.  His wife who was already pregnant with his child.  But no one would be the wiser.  Right?

Perhaps David was too busy in his backslidden condition to remember that God sees everything.  God knows everything.  God is everywhere.  And what is done in secret is still seen and judged by God.   We can’t escape the all-seeing eye of God.

Oh.  How the mighty have fallen for lesser things.  But sin starts small.  And it grows into uncontrollable urges and desires.  It grows into believing that consequences are for others.  Not for me.  I deserve to have whatever I want whenever I want it.  Or so thought David.

But the consequences were great.  And oh.  How he fell.  Perhaps not publicly.  But privately, David fell.  It took a brave man named Nathan who provided wise counsel to open David’s eyes to see how he had lost control of himself.  He knew there would be severe punishment.  In some instances, it would mean death for the offender.  But God had mercy on David.  God spared David’s life when he didn’t have to.  You see.  God wasn’t finished with David.

But the baby who was conceived out of lust and passion was doomed to die.  He only lived for seven days.  And in those seven days, David was a broken man.  He fasted.  He prayed.  He begged God to save his son.  But no.  This baby would not live to be a reminder of the adultery and murder that one man’s lust had caused.  This baby would not survive.

Oh.  During those seven days, David wept and pleaded with God to save his son.  He humbled himself before God.  He asked for God’s forgiveness.  God heard his prayer.

God forgave David of the horrible sins of adultery and murder.  Oh.  When the mighty fall, they can be picked up.  Shined up.  They can be forgiven.  But they will be scarred.  They will be bruised and bumped around.  There will be consequences.   But their sins will change color.  They will turn from scarlet to white as snow.  Their sins will be forgotten.  As if their sins were never committed.  As if David had never considered adultery or murder.  As if he had never done those things.  Because when God forgives, he forgets.  And that’s what we usually forget.  We forget that God forgets.

Oh.  We are unworthy.  Our sins are many and are hearts are so human.  We fail so often.  But God will forgive us each time we sin.  If we ask him to forgive us.

Who knows if David ever forgot that son who lived for seven days.  Somehow through the bumpy start of their marriage, David and Bathsheeba moved on.  God gave them more sons.  Their next son was Solomon.  And God loved Solomon.  His name means “beloved of the Lord”.

It’s hard to imagine biblical history without Solomon as the next king of Israel.  It’s hard to imagine who would have worn the title of wisest person who ever lived, if Solomon hadn’t been born.  It’s hard to imagine who would have built the temple of Jerusalem, if not for Solomon.  You see.  If David and Bathsheeba hadn’t been together, all of Solomon’s accomplishments wouldn’t exist.  But because God showed mercy on Solomon’s father, David, Solomon existed.  He ruled the nation of Israel.  He built the temple that King David only dreamed of building.  He was the wisest of all men.  If not for God’s mercy, would Solomon have ever existed?

We can never out-give or out-forgive God.  He is merciful when we least deserve it. 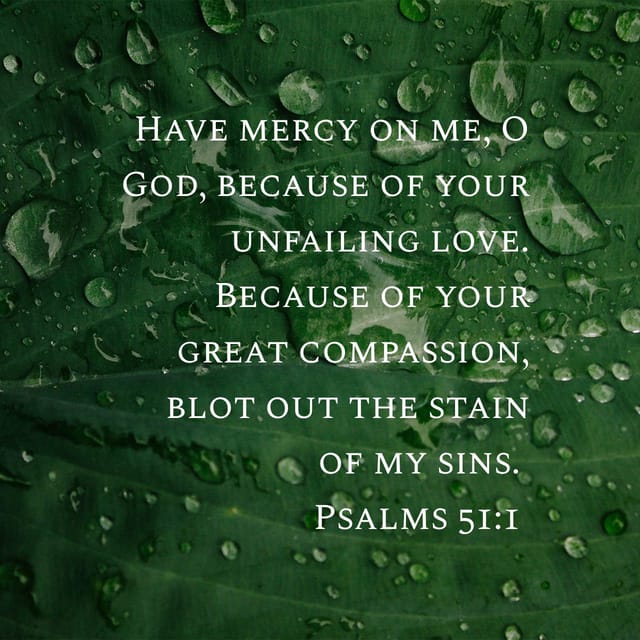