She texted me. I’m not feeling good about my job today. She said. She went on to tell me how a coworker had called to tell her that she had made some mistakes. And then later, an executive called her and pointed out a couple more mistakes. He asked her why she did what she did. She was upset. She said that if we were asked to go back into the office to work, she would have to start looking for another job. Facing these people on a daily basis would just be too much for her.

The trouble is. This job has always made her uncomfortable. And when she feels uncomfortable, she questions every decision she makes. And when someone calls her out, she beats herself up over and over. Isn’t that typical when we hear words of correction or rebuke?

But the first person who called her said she saw some of her work just on a fluke. They weren’t really checking up on her. But she wondered about that. And they informed her that she wasn’t doing things right. The second person is the one who makes all the rules for the company. He’s one of the owners. So when he says you’re doing something wrong, it’s because you’re doing things different from the way he intended the company to run. That would make a person feel bad about themselves. But his tone and method of delivery are usually abrupt and unkind.

The thing is. Both of the people who called her sometimes make questionable decisions. They sometimes make their own rules for how they do their work. And they do things different from how they train others to do the same work. I know because I’ve seen it happen with both people in recent weeks. Yet they have the nerve to reprimand someone who isn’t doing things the “right way.”

So while they’re pointing out the splinter in someone else’s eye, they’ve forgotten that they have a beam in their own eye. They’re blinded by that big splinter that’s been stuck in their eye for a while. It’s blurring their vision. Oh. I’m sure they thought they were helping her. But in fact, they made her feel very uncomfortable and more unsure of herself than she already is.

Is that how we should treat others?

I wonder how they would feel if someone called them and pointed out their mistakes. I did that recently. In fact. As part of my job, I was checking the first person’s work. I noticed that she did something different from the way I was trained. So I mentioned it to her. Oh. That’s how I do it. She said. Oh. I thought. Why are you changing the rules for yourself? But I didn’t push it any further. I just said ok and went about my business. Because I know that I sometimes do things outside the norm of my job. And if I were asked about it, I would have to give a reasonable explanation for why I do what I do. I just know that there are sometimes two ways to solve a problem. So I didn’t want to make a big deal of the situation.

But yet, this person is the one who trains all new employees. And I realized that she’s training new people to do the work different from how the rest of the team was trained. So who is right, and who is wrong?

Do to others whatever you would like them to do to you. Matthew 7:12

In the past week, three different people have vented to me and then later apologized for it. I get it. I’ve been in a venting mood lately, too. I’m far too critical of others. I don’t agree with decisions being made at work. I’m frustrated. And I’ve just had it.

I even said words to someone I love that I later regretted. I knew when the conversation started that it could go wrong if I let it. And I did. I took my words down an unneeded path. And he fell silent. I knew I was in the wrong. And I felt horrible about it. Because I knew if the situation were reversed, I would do the thing I was accusing him of doing. And he wasn’t even doing anything wrong.

It seems that I see everything wrong with the other person or situation and don’t stop to look for the good. The fact is that I’m being blinded by the beam that is in my own eye. It’s causing my vision to be skewed, and all I can focus on is everyone else’s imperfections. I guess I think their imperfections are worse than mine.

It’s easy to get frustrated with others. They can rub us the wrong way. Or insist on getting their way. They may demand more than one can give. They can push the wrong buttons on just the right day to make everything seem impossible.

What faults do I overlook in my own life that I can easily spot in others? Perhaps, I should stop and perform surgery on my own judgmental attitude before I pretend to help others. Who says I’m right and they’re wrong.

Why do I tend to focus on the misdeeds and faults of others and not look at myself? I need to remember that when I point a finger of judgment at someone, there are three other fingers pointing back at me.

Our words are important.

If I had to eat my words, what flavor would I taste? Would they be sweet and satisfying or deadly poison? Would I ask for a second helping or choke on the first bite? I have to ask myself how my words affect my listeners. Do people come back to hear more, or do they avoid me like the plague?

I like to think that I treat myself well. Without going overboard, of course. But do I treat others the same way? Do I give others grace when they need it most? I read this week that the world needs more love and less judgment. I heartily agree.

So encourage each other and build each other up, just as you are already doing. 1 Thessalonians 5:11

I had scheduled the massage a few weeks earlier.  I even got a confirmation the day before reminding me of the appointment.  But when I arrived at the appointed time, my massage therapist wasn’t there.  He wasn’t in when he should have been.   He was at a training class in another city.  But no one told me.

Oh.  I was upset.  I was very unhappy.  To find out I wasn’t going to get the massage I desperately needed felt like an insult.  A hard slap in the face on an early Saturday morning.  I wanted to cry.  I wanted to tell them I would never be back.  Don’t ask if I want to reschedule.  But I didn’t.

The thing is.  I liked him.  Oh.  I liked his work.  He has strength in his hands that I’ve never experienced.  And with each massage, I would get a lesson in massage therapy and anatomy and physiology.  Even if I didn’t ask for it.  He’s passionate about his work.  He tries to work out all the tight spots in the small amount of time he has with me.  Oh.  It’s never enough time.  I have too many tight muscles.  Too many issues.

He talks to me about the muscles he working on.  Deltoid.  Biceps.  Quads.  Minimus.  Hamstrings.  He talks about foot stretches.  He mentions fascia and flexibility.  Don’t look down so much.  He says.  He gives advice on how to care for my body.

I rescheduled with him.  He was there at the appointed time.  He didn’t say a word about the jumbled schedule.  But toward the end of my massage, he said the words I wanted to hear.  Do you need to be anywhere?  Because I can keep working on you.  Twenty-five minutes later, he finished the massage.

Disappointment a couple weeks earlier turned into an extra long massage.  His generosity won me back.  His work is great.  His technique is effective.  I wouldn’t have known that if I hadn’t given him another chance to prove himself.  He is worth it.

I have loved you with an everlasting love.  I have drawn you with unfailing kindness.  Jeremiah 31:3

I do know that God hears my every prayer.  He knows my pain.  He knows my hurts and longings.  Oh.  He doesn’t take them away just because I ask.  But he does stand with me through the ups and downs of life.

He talks to me about acceptance.  Kindness.  Generosity.  Don’t be so negative.  Help others.  He reminds me that I’m not perfect.  I’m forgiven.  He asks for my trust.

He teaches me lessons about life and love and contentment.  Even when I don’t ask.  He shows me everlasting love even when I don’t deserve it.  He blesses me when I least expect it.  He never gives up on me.  He’s always available when I need him.  He always out gives and out loves me.

But then again.  I don’t understand why God would choose to bless me with a great life.  I’m thankful and I’m loved.  I’m chosen and I’m forgiven. 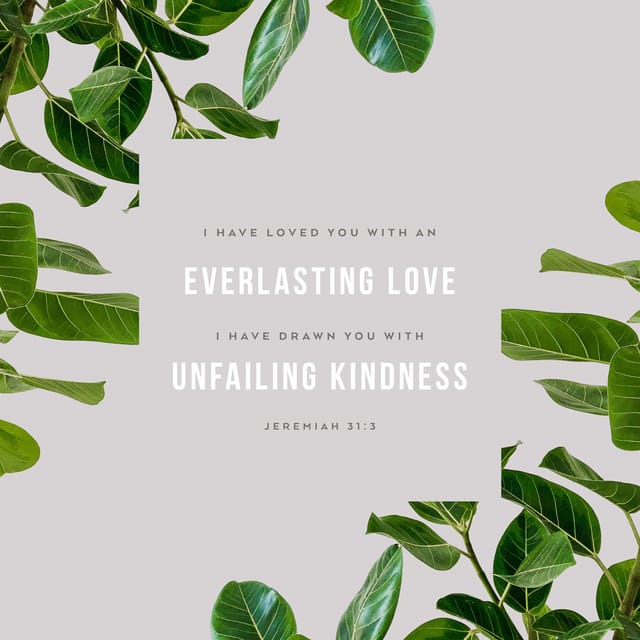