He was the commander of the king’s army. The king had great admiration for him. He was, after all, the king’s right hand man. He had the king’s ear. And his trust. He had secured great victories against their enemies. But this man suffered from leprosy.

One of this man’s conquests was raiding the land of Israel with his army. And with this mighty victory, they brought home prisoners of war. This great leader placed a young girl in his home who served his wife. She was a servant. A slave. One of the spoils of war. But what he didn’t know was that she had great faith in the God of her ancestors. And when she saw him suffering from this incurable disease, she told his wife that he could be made whole if only he paid a visit to the prophet Elisha in Israel.

So Namaan took a trip to Israel to find out about the healing that was spoken of by this lowly foreign slave. He eventually made his way to the home of the prophet where he was told to go dip himself in the muddy Jordan River seven times. He was insulted and said no. But the army officers with him convinced him that if he was told to do something great he would. So why not try it. And when he came out of the water on that seventh dip, his skin was cleansed of the deadly disease. Namaan had been healed.

He now believed in the God of his stolen slave girl. He now believed that the foreign gods he had been bowing to were worthless. He must now only bow to the God who created the universe.

So he made a trip back to pay respects to Elisha. He wanted to honor his new found faith and offer gifts to the one who had a hand in his healing. He felt indebted to the giver of new life. But there was a problem.

Namaan worked for the government. He spent time with the king on a daily basis. There was no way he could escape his responsibilities as he served the king. And the king bowed down every day to a false god. Namaan was expected to do the same. And now that his allegiance had turned from a false god to the One True God, he knew that in his heart he couldn’t bow to the king’s idol. He must only bow to his Creator. But how could he do that when he was expected to honor the king’s wishes? How was he to show that his faith was now in his Heavenly Father while bowing to a manmade object? How is it possible to do both? And he knew that would be a problem.

He had to keep his faith a secret in order to keep his job. Could he do it? By keeping quiet about his faith, would he lose his faith? Speaking openly about his newfound trust in God Almighty could prove the downfall of his career. Was he willing to risk it all for his faith? Could he be a light in the darkness that surrounded him?

Then Naaman said, “All right, but please allow me to load two of my mules with earth from this place, and I will take it back home with me. From now on I will never again offer burnt offerings or sacrifices to any other god except the Lord . However, may the Lord pardon me in this one thing: When my master the king goes into the temple of the god Rimmon to worship there and leans on my arm, may the Lord pardon me when I bow, too.” “Go in peace,” Elisha said. So Naaman started home again. 2 Kings 5:17-19

Christians today are having to make a choice of whether to speak up at their workplace about the cultural lies being forced on them. They don’t know if it could cost them their job or not. Some choose to fly under the radar and not make waves. Because really. If they aren’t being forced to state their pronouns or wave a pride flag, why speak up. I don’t know the right or wrong choice. I’ve not be placed in that situation. I haven’t been mandated to do anything. But what I believe is that this issue must be between each person and God. With much prayer and even fasting, God will make it clear to each of us how we should live and work in a world surrounded by those who are against God. And therefore, they are against us.

We must be concerned about what God thinks of our presence in a world full of sin. Oh. We can’t escape this world and remain alive. So while we’re still breathing and moving about on this planet, our desires must be centered on pleasing God while surrounded by the enemy. No. It’s not an easy task. No one said it would be. We can read of many examples in the Bible of great people who failed miserably. Some of them got up and dusted themselves off pledging their faithfulness to God Almighty. Others wallowed in their sins and never repented. I pray that we will be like the former and not the latter.

We know that we must live in this world as it is today. It’s our responsibility as believers to be in the world but not of the world. We must live in a way that honors God and his message of truth, hope and salvation. We must live for the eternity that awaits us in light of the forgiveness of our sins and our commitment to serving God and only God.

Consider those who live in distant lands where living their faith openly is in defiance of their government. They go about their work and live quiet lives. Yet they meet in secret with fellow believers and they hide their Bibles in out of the way places. Oh. They know full well what they’re facing if discovered. And yet they’re willing to practice their faith in private. They perform their work, even if it is back breaking and hard labor. They don’t give up their faith because their lives are hard. Their faith thrives in spite of their very difficult circumstances. In spite of being quiet in their workplace, their faith is firm. Can we do the same?

Sometimes I feel invisible at work. I work hard. I do my job well. I don’t cause trouble. If I didn’t speak up about issues I feel strongly about, would I even be noticed?

Is it because I don’t make waves? I don’t cause trouble.  I don’t do personal things at work. So I’m not noticed. That should be a good thing. Right?

Why am I not included in certain group emails or chats that relate to questions I can answer? Why am I not offered preferential treatment like others are?

Why does special treatment pass over me to others who’ve come after me? Because where I work seniority is everything. Except when it comes to me. Or so it seems.

I ask myself these questions but I don’t voice them. But it doesn’t make sense to me.

These are things I ponder. But I don’t want to dwell on them too long, or they could begin to fester. My wondering could become a bad attitude and take me down a path of sin. Sin as in grudges, treating others in a way that puts me and them in a bad light. Gossip. Saying things, true or not, about others just to puff up myself and put them down.  I don’t need that, nor do I want it.

Do not be afraid, for I have ransomed you. I have called you by name. You are mine. Isaiah 43:1

I received a great performance review. No negative feedback. No suggestions for improvement. A decent raise. But it makes me wonder. What was the feedback they should have given? After all, I’m far from perfect. Or does my reviewer just not know how to give feedback, regardless of it being positive or negative.

I ponder. I have to leave it all in God’s hands, because his ways are higher than my ways. His plan is perfect. I need to trust him even when I can’t see the road ahead.  Perhaps God is protecting me. Shielding me from petty differences. Guiding me down a narrow path, because the wide path may lead to disgrace or discouragement. Perhaps he has me right where he wants me. And I just need to let go of any feelings of concern that could begin to grow if I dwell long and hard enough on them.

Why can’t I be content where I am? Why do I continue to want what I don’t have, even though I don’t know what I want? And I know that what I have is right for me right now. Do I just want to be noticed and rewarded for doing my job? Is this just an issue of pride trying to replace my humble lot in life?

I know the One who knows my name. I am not invisible to Him. He knows the plans He has for me. Plans to prosper me and not to harm me. Plans to give me hope and a future. He holds my future in his hands. And my future in His hands far outshines the future I can try to manipulate or instigate. I need to be silent and wait for His lead. May His name be praised. 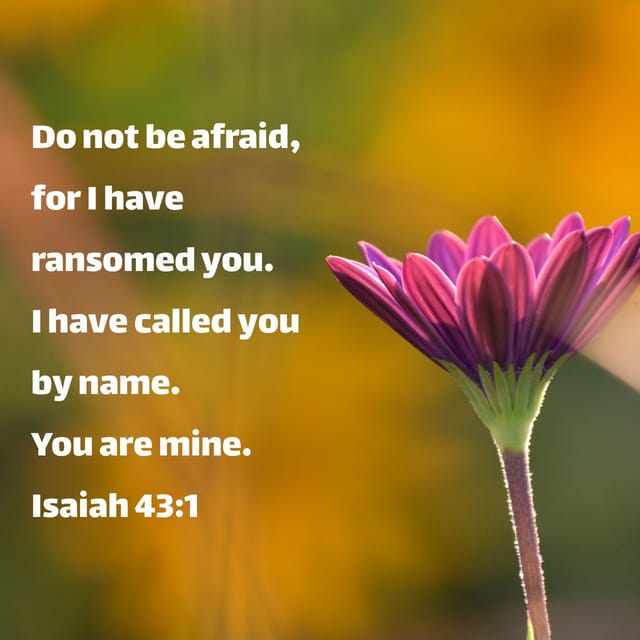